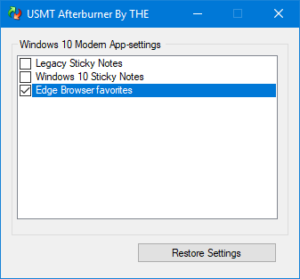 – And any other Modern app settings..

As many a frustrated Administrator has experienced, after FINALLY getting USMT to actually migrate the settings for Edge or Sticky Notes, they still don’t show up!
The reason is obvious actually, as the “Modern Apps” like Edge and Sticky Notes on Windows 10  does not configure until after the user logs in first time.

To solve this I’ve built an “afterburner” for USMT. It is basically a small program that run AFTER the migration of the user data. USMT still migrates the data from the source PC but we instruct USMT to restore to an alternate temporary location.

The user (or supporter) then simply opens USMT Afterburner upon first login and restores the Modern UI Apps settings after the App has run the first time.
USMT Afterburner checks if conditions are right prior to restoring and, if needed, instructs the user on what to do.

Files are free to download at Ehlertech.com under “Other Programs”

More in this category